Gliding is a recreational activity and competitive air sport, in which pilots fly unpowered aircraft known as gliders. Using naturally-occurring currents of rising air to remain airborne, gliders can fly for hours and travel hundreds of kilometres. If you've ever wondered how gliding works - this page is for you.

As gliders do not have engines, they need to be launched into the air. A higher launch means a longer flight, however if the weather is suitable for soaring it is only necessary to launch high enough to find a thermal. Cambridge Gliding Centre offers two launch options: Winch and Aerotow. 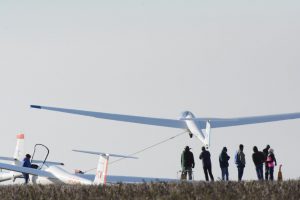 Winch launching is the most common launch method in the UK. It is fast, cheap, and is how most people learn to fly. The glider is attached to a long cable, which is wound in but a powerful engine, dragging the glider into the air. The relatively low launch height normally only allows for short flights (5 – 10 minutes). However, during early training short flights allow lots of practice of take-off, circuits, and landings, which is just what a student pilot needs. When the weather permits soaring, it can be difficult for an inexperienced pilot to find a thermal quickly enough from a winch launch.

Aerotowing is the slower, gentler, more expensive way to get into the air, but it allows you to launch much higher. The glider is pulled into the air behind a powered aircraft, and  thus can go as high a you are willing to pay for. Introductory flights are usually done on aerotow as are some of the advanced training exercises.

Launches between 2,000 – 3,000 ft typically suffice for training or soaring needs with higher launches of up to 5,000 ft only necessary for aerobatic training. 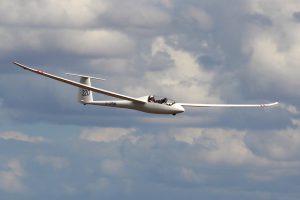 Finding and flying in lift is known as soaring; while easy to learn it takes a lifetime to master. Just like birds, gliders can stay in the air and climb by using natural rising air currents. There are many different causes of lift, some generally associated with hilly or mountainous terrain,  but in East Anglia we mostly see thermals. Finding the best lift, allowing you to fly further and faster than other pilots, can give you the competitive edge in the sport.

A thermal is a bubble of warm air created when the ground is heated by the sun. The bubbles rise and at its top usually creates a small puffy cumulus cloud. With practice, a pilot can recognise a thermal and fly in a circle within the thermal to gain height. Once the glider has climbed in can then fly on to the next thermal, and repeat the process, using thermals as stepping stones in the air.

With the right weather conditions, it is possible to stay airborne for many hours and travel hundreds of kilometres using only thermals to stay aloft.

This video was created by the British Gliding Association's Glide Britain initiative filmed at many gliding clubs around Britain including at the Cambridge Gliding Centre:-

You do not need any prior experience to start gliding; most people are able to learn the basics and have their first solo flight within a year. All clubs in the UK teach to the same syllabus set by the British Gliding Association. After going solo and additional training you can gain a pilot's licence.

Once you have learnt to fly you can take part in local, regional, national and international competitions. Competitions typically take the form of a race around a pre-defined course of hundreds of kilometres.

Experienced pilots may wish to learn to fly aerobatics and even take part in aerobatic competitions. During the winter we provide regular training sessions for aerobatics.