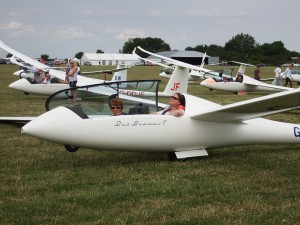 The Inter-Club League has been cancelled in 2020 due to coronavirus, but will return next year.

The Inter-Club League is a friendly competition among small number of nearby clubs (in our case: Gransden, The Gliding Centre – Husbands Bosworth and London Gliding Club – Dunstable). It is distributed over several weekends during the summer.

Any member cleared for cross-country flying is eligible to join our teams. We can have up to 3 pilots in each of the classes, and it does not have to be the same people for every leg of the comp. so there are plenty of places available.

For those who have not flown in competitions before, this is an excellent, low-stress introduction! You get weather and NOTAM briefings and different tasks are set for each of the three classes.  You can winch or aerotow, and fly the task whenever you choose.  It’s much easier than planning your own X-country!

Each club fields a team on each day – but the team does not have to consist of the same people on every day. The host club provides the necessary facilities including weather forecasting, task-setting, and scoring.

It helps to have some crew, but this is not essential, as we will have several pilots flying from Gransden on every day, and mutual retrieves are assured

The pilot classes are defined as follows:-

Any pilot who, by 1st April of the League year:

Novices may only fly a club class glider and must not carry water ballast.

Any pilot who by 1st April of the League year:

Anyone can be a pundit. If desired, a pilot may fly in a higher class, e.g. a pilot qualifying for Intermediate status may be entered as his club’s Pundit.